Director: Phillip Noyce
Writer: Kurt Wimmer, Brian Helgeland
Cast: Angelina Jolie, Liev Schreiber, Chiwetel Ejiofor, Andre Braugher
Plot: As a CIA officer, Evelyn Salt (Jolie) swore an oath to duty, honor and country. Her loyalty will be tested when a defector accuses her of being a Russian spy. Salt goes on the run, using all her skills and years of experience as a covert operative to elude capture. Salt’s efforts to prove her innocence only serve to cast doubt on her motives, as the hunt to uncover the truth behind her identity continues and the question remains: “Who Is Salt?”

Pros: Nice premise. Jolie has a history of good action rolls including Lara Croft, Wanted, Mr. & Mrs. Smith, the latter 2 of which are enough to fill her action vixen resume.

Cons: The movie fails to establish the credibility of Salt in the beginning of the story. Jolie didn’t appear strong as she has in other films. The wigs were distracting.

Overall: I WANTED to like the film walking into the theater. It had an exciting trailer which seemed to capitalize off of the Bourne Identity energy. There were clips of enticing Jolie in the trailer which never hit the screen. In the end it was lack luster and wasn’t much more than a time passer. Overall Rating: Wait for the DVD. 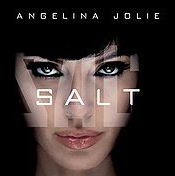