The Book of Eli:

Director: Allen Hughes, Albert Hughes
Writer: Gary Whitta
Cast: Denzel Washington, Gary Oldman, Mila Kunis, Ray Stevenson, Jennifer Beals, Evan Jones
Synopsis:Eli (Denzel Washington) has been on a journey, walking across America after a cataclysmic war that turned the earth into a barren wasteland. The world has become a lawless civilization where people must kill or be killed. Eli is a peaceful man, intent on completing his intended task, delivering his precious cargo into the right hands. Eli guards the book with his life, and others will stop at nothing to obtain it.

Pros: Denzel Washington dispatching scores of villains. Denzel Washington at the top of is acting game still. Two cool fight scenes and one cool shootout. Story has a good message, and interesting main character. Every shot of him in this character is hopeful for the audience that something worthy will happen.

Cons: Everything else. This is the story that doesn’t move. There are a few nice moments, all of which appear in the trailers. The pacing of the story is long and slow. Doesn’t know if it wants to be an action film or a philosophical message. As a result it doesn’t do either well.

Overall: The Book of Eli was on my list of films to look forward to. I wanted to like it. Denzel is the man, and Denzel with a SWORD had the potential to be AWESOME. Unfortunately this movie played out like watching a pretty cool painting mounted on the wall. It looked nice but didn’t go anywhere. All of the potential of this adventure was front loaded and simply went downhill, or dragged on from there. Even if you’re a huge Denzel fan, I’d say wait for the DVD. He’ll still make money on that. 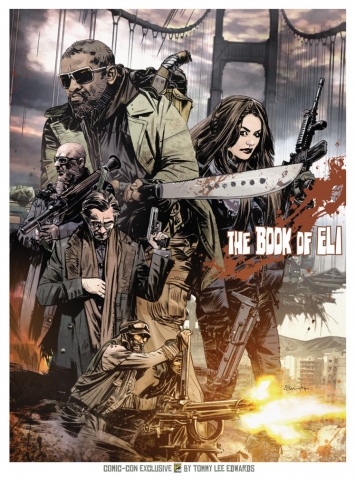 4 replies on ““The Book of Eli” Movie Review”

I am going to see it before the end of the week. I understand, it’s good. Be Moore, contact me at mahomesj@bellsouth.net. Let’s talk.
Thanks

i saw it last weekend. It was a C+/ B- movie. It wasn’t a mindless shoot’em up film nor was it the super deep and entertaining cult classic. It was somewhere in the middle. The acting of course was superb but the story was somewhat uneventful while delivering the underlying message.

denzel washington is of course one of the sexiest black actors that you can ever see “`,

This movie was amazing. It started slow but how can you go wrong with Denzel. Worth the watch