Plot: THE EXPENDABLES is a hard-hitting action/thriller about a group of mercenaries hired to infiltrate a South American country and overthrow its ruthless dictator. Written, directed by and starring Sylvester Stallone, THE EXPENDABLES brings together a dynamic cast including Jason Statham, Jet Li, Dolph Lundgren, Randy Couture, Steve Austin, Terry Crews and Mickey Rourke.

Pros: The cast is the BIG pro on this one. Imagine being able to create these combinations at will: Rocky vs Ivan Drago, UFC vs WWE, Dolph (extra tall) vs. Jet (4 foot something), Rambo vs. Commando, The Master vs The Transporter, the list goes on. Welcome Terry Crews to the action genre. I think he’ll go a long way.

Cons: The first thing that comes to mind on the cons list is KNEES (OJ Simpson voice – Ashy bad knees). Watching Arnold walk and Sly run is painful. The movie is predicable, but you knew that when you saw the trailer the first time. Also the stereotypes are prevalent, starting with Somali pirates… Oh and Mickey Rourke.

Overall: The Expendables is an action packed very fun movie. It’s the exact opposite of Inception. It’s not smart, thought provoking, or respectful of audience intelligence. But if I were to see movies twice in the theater, this would be on my list. Things go BOOM, and the audience smiles. Simple formula with a great cast to pull it off. Also big up to Sly for writing and directing. That dude deserves whatever respect points he’s earned in Hollywood for mastering the B movie and turning it into Millions. 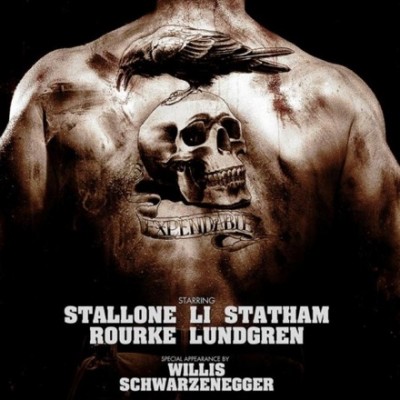