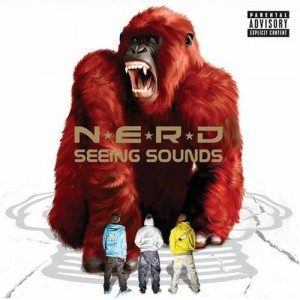 N.E.R.D (Nobody Ever Really Dies) returns with their 3rd studio album “Seeing Sounds” which is an appropriate title. Although classified as alternative, N.E.R.D really does an amazing job blending a bunch of genres from rock, hip-hop, R&B , and electronic (among others) to create a listening experience that will undoubtedly have all who are bold enough to go on this journey with them, SEEING SOUNDS. The album cover is very clever as well showing the three man band of Pharrell, Chad, and Shay standing with their backs to the audience looking up at a King-Kong sized gorilla who is roaring; truly a definition of seeing sounds if there ever was one.

The album opens with Pharrell reminiscing on the days of yesterday, (over what sounds like could be a cartoon jingle), back when children would play outside, and summers were marked by record breaking heat where your only choice to cool off was to take “several showers a day.” These were the days when he says he first started to see sounds. This takes us into the opening cut “Time For Some Action” Quite to my surprise it does not sample Redman’s classic song of the same name, but the message is sent just the same: fasten your seat belts!

“Everyone Nose (subtitled All The Girls Standing In Line for the Bathroom)” is a ‘clever’ song highlighting those who have an addiction to nose candy (who knew that’s how you could tell who got down or not??), while “Spazz” is perfect for the mosh pit crowds each time the chorus hits. “Anti-Matter” is a good jam, however the teeny-bopper like chorus of “you so anti it does not matter” may annoy some (not sure if it’s the words of the chorus or the girl’s voice, but if you don’t like it remember you were warned).

“Sooner Or Later” (my personal favorite) has two seemingly conflicting sounds styles that blend perfectly. What starts as a slow to mid-tempo piano tune with very subtle drums, changes pace as the chorus approaches when Pharrell sings “it all comes crashing DOWWWWN!!!!!” and on cue the drums are kicked up MANY notches going from 0 to 100 faster than a cheetah chasing a gazelle. Yet this is nothing compared to the two minute guitar solo to close the song which would make Prince or Hendrix proud. The guitar coupled with the crashing drums, combine to form one of the high points of the album.

Other highlights include “Killjoy” which sounds like a tribal war anthem and will definitely have feet on the dance floor as the groove, rhythm, and tempo of this song is undeniable. “Love Bomb” is a powerful ballad (yes ballad) which finds Pharrell musing, “We don’t need another love song/ we need a love bomb” before the loud, sweeping chorus comes in. Definitely a true gem!

Long time N.E.R.D fans should be very pleased with this effort and this album should attract new fans as well. While not the classic that their first album “In Search Of” is, it’s good to see the band not allow the commercial disappointment that was “Fly Or Die” stop them from making music that they want to make. What N.E.R.D has created with “Seeing Sounds” is a balancing act for the ages.

I’d be remiss if I didn’t add this: one of the best ways to digest this album is to play it in Itunes, turn the visualizer on (Ctrl-T or from the tab select View> Show Visualizer), and just sit back and enjoy the light show. This will only enhance the listening experience that N.E.R.D created for this album.