PRAIRIE VIEW, TX – After leading the Panthers to their first SWAC championship since 1964, head coach Henry Frazier was honored this week by being named the Eddie Robinson Coach of the Year by the Sports Network.

“It is the greatest honor in my career,” said Frazier. “That award was named after the great Eddie Robinson from Grambling University and I believe I am the first coach from an HBCU school to win the award, it’s a great honor.”

Frazier took over the program back in December of 2003 and in 2007, he led the Panthers to their best season at that point, going 9-1 and picking up several honors along the way , including the Sheridan Broadcast Network/Eddie Robinson Coach of the Year and the American Football Coaches Region III FCS Coach of the Year.

“I thank my players and I thank my coaching staff,” says Frazier. “It has been a great run so far and there are still a couple of more award that I am up for and it has been a blessing.” 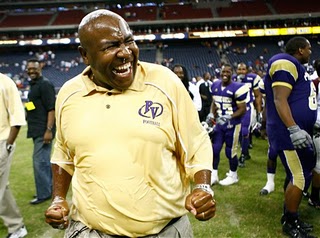