Brooklyn school teacher Samiayah Johnson decided to do the holidays different this year, so she and her home girls broke East… ways East. All the way the the Chech Republic to visit Prague. Here’s her story

The question I got most after telling people my New Year’s plan was “Prague? Why are you going to Prague?” My answer was short and sweet “why not?” For years I have heard numerous people and read article after article about how much fun Prague was. Interestingly enough those people who often extolled the excitement of the Czech Republic were almost always white. That fact alone, sold me. My friends and I wanted to do something that your average black woman would seldom do, go to a central European country with very few people of color during the winter. Am I crazy? Possibly. Was I nervous? A little. I had a bit of nervous excitement, truthfully I was more nervous about the weather than anything, cause we black folks really don’t like to be cold. But, I felt I owed it to myself to break out of my comfort zone going into the new decade and do something brand new. Plus, my curiosity to know what all the fuss was about wouldn’t let me back away. To put the trip in a few concise terms, the experience was beautiful and fantastically, crazy, fun.

Now, as a student of design I must say that Prague is a beautiful city. The medieval buildings, bridges, and churches were breathtaking. The architecture had that wonderful esteemed aged look naturally that many buildings here in the States try to emulate. But the standouts were the castles, the Charles Bridge, and the Gehry’s “Dancing House” building (an architectural wonder). Seeing all the wonderful historical sites alone made the trip worthwhile. But, if there’s nothing else the city is known for, it’s their party scene. And, a scene it truly is. 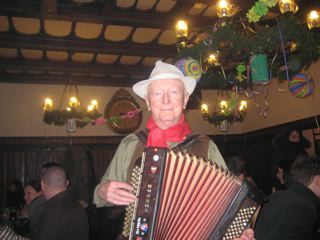 Not knowing what to expect, I along with my friends relied heavily on word of mouth. We got a few good leads from the first hour we were in town from our cab driver (a great lover of Michael Jackson who blessed us with some of his dance moves in the car). We got our hotel (Best Western) a bit early so we decided to grab a bite of a late breakfast. We strolled into a nice pub type restaurant next door at 10am and were asked upon sitting down if we wanted a beer. Of course we were surprised, mainly because I’m used to drinking some sort of fruit juice around that time of day. But hey, when in Prague you do what the locals do (I’m not even going to discuss the tray of shots being prepared)! Black beer is their specialty and as a non-beer drinker I must say it was quite nice. We then jetted off for a tour of Old Town. This allowed us to see much of the beauty of the city, but I wish I had packed some ski gear because although I had on my good boots, after a few hours, the feet were a little frosty. We rested up after that experience because we knew we were going to act up later that night.

Going on the suggestion of the previously mentioned cab driver we went to the Karlovy Lazne nightclub, the self-proclaimed “Biggest music club in central Europe”. And, from witnessing it first hand, although I haven’t been to any other central European country, I think they are telling the truth. I dubbed it the “never-ending club” cause it just kept going. Traveling through floor, after floor, after floor of people dancing and drinking was quite a site to behold. We finally reached the top floor and made nice with some friendly Italians. They then invited us out to another spot. On route to the club our new friends decided to pop a bottle of champagne on the street! Why not, right? Club number two was not to our musical liking, so my friends and I (sans the Italians) made our way to the bar Bombay. Although it was the smallest of the three places it was the liveliest. As soon as we entered we started dancing and got invited to a table to drink. This was also the first spot in which we saw more than one or two black folks. All types of countries were represented there, Senegal, Morocco, Curacao, and Cape Verde to name a few. Everyone was smiling and laughing, and having a great time. It was a perfect first night in the capital city and definitely one for the memory books.

Well, after that first night we wanted to take it down a notch slightly. After all we didn’t want to be partied out before New Year’s. So in planning our trip we booked tickets to the Opera. At least we thought it was the opera. After reading the fine print, we realized that it was a different take on the opera, one performed with marionettes! If you ever get the need to see something that’s a little creepy and ridiculous, this is where you need to be. The word weird doesn’t even begin to explain the experience. I’ll just say that it took a lot of self-control to not laugh through the whole thing. It was quite fantastic.

Upon leaving the theater I spied a bottle of a bright green libation. Upon closer inspection I saw that it was that ever-controversial liquid Absinthe. If you didn’t know, Absinthe had been banned in countries all over the world. According to a French critic back in the day, “Absinthe makes you crazy and criminal, provoke, and has killed thousands of French people. It makes a ferocious beast of man, a martyr of woman, and a degenerate of the infant, it disorganizes and ruins the family and menaces the future of the country.” Well of course we had to try some, but we were way too fearful to get a regular sized bottle and went with the mini-bar size. After drinking a third of the licorice tasting liquid, my friends and I were feeling our sense of touch a little more acutely, but nothing too strange. We traveled to the bar downstairs to up the ante and get a shot each. Now, that did it! It’s really hard to explain Absinthe’s effect but it wasn’t the average “tipsy” feeling, but we were definitely not in a normal state. But, we were still within our faculties to know that if we had one more glass that would be a wrap so we cut ourselves off. We later entered Nebe, a really nice basement club that served pitchers of Long Island ice tea with ten 3foot straws. After the Absinthe I made the decision to stay away from that concoction. Radost was the second club of the night; upon the suggestion of a friend we met the previous evening. That place held the most black people I saw in one spot on the whole trip. But I must say they were all male. My friends and I were the only black ladies, outside of two others, that I saw the entire trip! Although we knew seeing folks like us would not come frequently, it’s one thing to know of it, another to experience it. With that said, I didn’t feel any bias at all. Prague is definitely a friendly city. 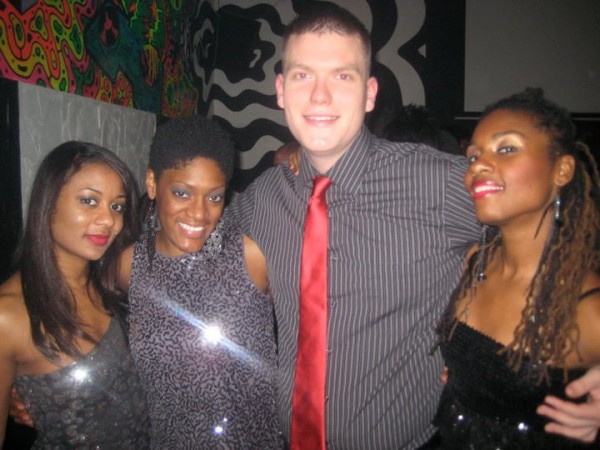 Upon our last evening in Prague we decided to do some souvenir shopping on the Charles Bridge and took more scenic pictures. The evening’s plan was to partake in the party thrown by “The Drunken Monkey” which consisted of club #1, bottle of Moscato, bus ride, Club #2, bus ride, and Club #3. In other words, it was going to be a full evening. The first party I can say was good enough. It was packed with people from all over including a surprising number of Americans living in Prague. Right before midnight the whole club went out to the bridge and each person getting their bottle of Moscato to welcome in the New Year. Fireworks were lit, kisses were given, and 2011 was welcomed in with a bang!

We had an excellent time in a fabulous city. The beauty is mysteriously enchanting and the people and places are fun to go to. I highly recommend a visit to this historical town in the Czech Republic. Just know if you go in December, don’t forget your long Johns.