Planet Fitness: Not Such a “Judgment-Free Zone” After All – Ban Women’s Hair Scarves 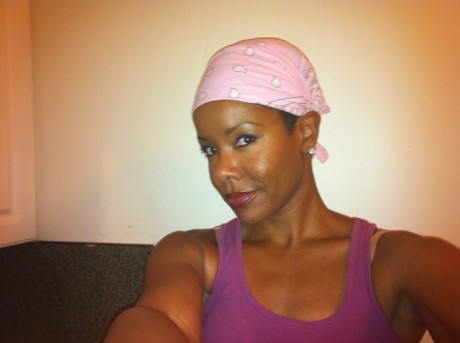 I consider myself to be many things – friend, tech-life expert, daughter among others.  I like to think that activist falls somewhere on that list, but beyond the sporadic addition of my name to a petition on Change.org, I don’t regularly make very many causes a priority in my life.  So while it might seem as if the mantle I’ve taken up is fairly trivial, I assure you it has implications much deeper than may appear on the surface.

My journey towards activism started a couple of weeks ago when I joined Planet Fitness.  I needed a place to run indoors while training for a 5K, and this gym had a lot of great incentives as well as a monthly membership fee that was very amenable to my budget.  I signed up online, and for a week I worked out without incident and was feeling pretty good about my choice of fitness outlet.  Then one day I entered the gym as usual, was checked in by an associate, and proceeded to the treadmill the same way I had done the week prior.  But today was different.  No more than a minute after I stepped on the treadmill, I was approached by the same associate and told that I would not be allowed to work out that day because of the scarf I was wearing on my head.  This shocked me a bit, as this was exactly the same type of scarf I had worn in the gym the previous four times I was there.

As it was explained to me, Planet Fitness has a ‘no headgear’ policy for all of its gyms, subject to the discretion of the individual owner/operator.  A Facebook inquiry yielded the following response:

“…We have a corporate dress code policy, for all Planet Fitness locations nationwide.

The above are all subject to our discretion. Exceptions are made for medical and religious reasons. We believe that this corporate dress code policy helps us to consistently promote a non-intimidating atmosphere at Planet Fitness where members can feel comfortable working out no matter which Planet Fitness location they are using.”

While I appreciated the prompt response, something about this policy just didn’t feel right to me.  How was the decision made that headgear in a gym should be deemed ‘intimidating’?  And how was the further determination made that a baseball cap was less intimidating that any other headgear?  But on an even more fundamental level, how could headgear possibly be disallowed at.a.gym?

Here’s where I take a slight, albeit relevant detour.  In full disclosure, I am an African-American woman.  In print, on television, online, and anywhere else someone has been given a platform, much has been made of the “issues” African-American women have with their hair.  You can read about this at your leisure here, here, and here.  Let’s just suffice it to say that our hair proves a challenge for a lot of people to understand and leave it at that.  But just because you don’t understand something, that doesn’t mean respect and consideration shouldn’t be given when a specific need is brought to your attention.  My need is astonishingly simple:  I wrap my hair in a scarf when I work out.

I am not the only African-American woman, nor the only woman for that matter, who does this for any myriad number of reasons.  To protect the hair/keep it out of the eyes/prevent sweat from ruining the hairstyle/etc.  And while I’m certain the phrase “What’s the big deal?” immediately comes to mind for some who are reading this, there is actually more at stake than just vanity here.

It’s been shown that in a survey of women that don’t exercise regularly, 85% of all women have said that the maintenance of their hair is one of the reasons for inactivity.  This becomes especially poignant for African-American women, who are at a higher risk of obesity, high blood pressure, diabetes, and heart disease than other groups.  Last year U.S. Surgeon General Dr. Regina M. Benjamin stressed the fact that removing any barrier to physical activity is crucial to the health of American women, particularly Black women.  Is hair an excuse?  Maybe.  But it wasn’t my excuse, or the excuse of hundreds of other women that were informed of Planet Fitness’ policy while they were simply trying to improve their health.

I’ve always been a firm believer of when you know better, you do better.  There is a chance that Planet Fitness wasn’t aware of how important this issue is with such a large portion of their customer base.  Could I just go to another gym?  Of course, but that wouldn’t solve the problem.  Policies can and sometimes should change based on response to customer needs, and cultural sensitivity is a serious need that Planet Fitness must address.  It’s a little thing, but a big thing.  I want to work out, and I want to wrap my hair.  What’s the big deal indeed?

19 responses to “Planet Fitness: Not Such a “Judgment-Free Zone” After All – Ban Women’s Hair Scarves”