My Name is… Cedric Perry

The reason you are reading about me is… I’m reintroducing the art of storytelling (Hah, Slick Rick…get it? *Looks away*) Growing up in the suburbs, my youth included a lot of family gathering, black comedians, timeless music, and sports. So now I’m fusing those elements together to create the shows that make you laugh AND reflect; the happy medium between Roland Martin and Real Housewives.

Right now I’m working on… my new web show “We’re Just Talking”, a sitcom that highlights life on a Historically Black College campus. In theory, me and the Geek Squad (Devyn Swain and Raymond Bracy) write about our fast times at Cheyney U, but Hollywood would call it “Wayans Bros.” meets “A Different World” …yeah, you should be watching. I’m also working on the return of my talk show, “Pick 6”.

But if I wasn’t, I’d be… fighting for the equality of nice guys. I consider myself the “MLK of the good brothers”; working on our FREEDOM! In all seriousness, you’d probably catch me writing, playing Nintendo 64, defending the Sixers and/or Redskins, or filming.

One thing I do every day is… laugh. Something about laughing makes it easier to deal with the struggles we all face. There is no situation God can’t get you through (No Tebow), so laugh at the attempt to bring you down.

I can’t stand when people… don’t appreciate things/people until OTHER PEOPLE start to value them. Nothing about it has changed. It was hot then, and it’s hot now. Your ex-girlfriend BEEN fine. Don’t love her now because I want her! You corny! (I also dislike girls with big hair, but those are issues from my childhood jk…kinda)

But I love it when people… refuse to be average. We may not have the same views, but I love people who are actively pursuing their perception of success.

If you happen to run into me in the street… 1.) Speak. I curse under my breath when I say “Hello” to people and they don’t respond (Especially when they look at you.) Where are your scruples? 2.) Let me borrow two dollars. I get paid next week.

If I had to coin it, my message would be… Take pride in giving your maximum effort. At the end of the day, it feels great to say to yourself, “I didn’t leave anything on the table.” With filming, my daily work, or relationships, I take comfort in knowing that the parties involved are getting all I have to offer. When I don’t put my best foot and things don’t work, I try to learn from those situations.

My future plans and projects include… gathering sponsorship and support for “We’re Just Talking”. When I assembled the cast for WJT, I told them we had something really special, and that the product could not be denied. I feel even stronger about that statement than I did last August, and as the world starts to talk about We’re Just Talking, it’s only a matter of time. My other plans include: writing my third book, going to watch the Sixers play at Madison Square Garden, and scooping this attractive woman. She’s tough, but I just bought these loafers man…it’s going to be tough to deny LOL! 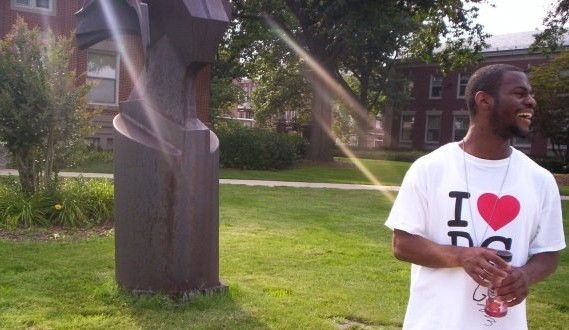 Big Ups to… my family, the WJT/Pick 6 crew, Y.M.e?, Alpha Phi Alpha (even though Will Packer REFUSES to tweet a brother), and Jesus aka the Real Jeezy. Also thanks to Bryndan “Be More” Moore (hot nickname, bro-seph) for supporting when he didn’t have to. When I get to the BET Awards, I’ll save you a ticket, but if Beyoncé is there, you have to sit on the OTHER side.