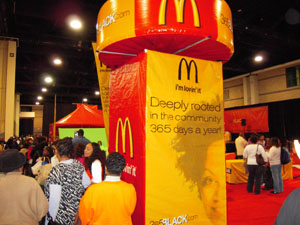 Millions of dollars are spent every year finding out what you want and developing creative ways to sell it to you. At the CIAA, corporate branding is everywhere. The most aggressive advertisements are by Ford, McDonalds, Coors, and Colgate. If you watch television or listen to the radio, there’s a good chance you’ve seen or heard one of the McDonalds’” Deeply Rooted” ads aimed at African-Americans.

Are these advertisements amusing and effective or polarizing and insulting?

0 replies on “Urban Marketing: Do you fit the stereotype?”

I remember being in the grocery store with my mother when i was like 6 years old. Asking her why we never see black people on TV. I got hushed by my mother Immeadietly( hey where is the spell check on here)…..
Because white people where standing around me……

So Im not gonna complain now when its positive…..balanced messages. I mean its not the negative GRAND THEFT AUTO video game sterio type….where everybody is GANGSTA GANGSTA!!

Ok, well, I’m not black, so I can’t say I understand this..I don’t. If anything, I’d say Mickey D’s is more deeply rooted in everyone’s arteries if anything. I don’t know how this slogan should make anyone want to buy more of their food. They should concentrate on improving their food, keeping it at a reasonable price, and stop screwing up the orders if they want to get more business.

I truly don’t have a problem with any of these commercials.. the first one shows people who look like me going to work, the second one is actually funny.. Shows a well dressed and groomed family having FAMILY(Important to note that mother and father are there) TIME.. and the third seems to be a business owner. I know your point but i think these are the wrong examples. McDonalds does a good job keeping the same monetary budget for all of their projects, I dont think the projects aimed toward our demographic are taken for granted or are the victim of a decreased budget or creative ingenious.

Check out my blog response to this post at http://blogs.alumniroundup.com/russy/2009/03/05/reurban-marketing-do-you-fit-the-stereotype/

I have had the same issues that aka Tito has with these types of commercials. Everytime I see one I suck my teeth, although I can’t ever quite put my finger on why. The synthesized R&B music and fake hip hop beats, people pop-locking at the dinner table etc. is really annoying. Why? I really can’t give a concrete answer, it just doesn’t sit right, and I think that’s why akaTito even brought this issue up. After the media made such a big deal over Barak and Michelle Obama’s fist-pump McDonald’s clearly has a lot of nerve encapsulating that into one of their commercials. The thing is, I am not necessarily offended as I am annoyed at this depiction of minorities. For me when I see such appeals to my “blackness” it inevitably delegitimizes whatever the product is.

McDonald’s and Malt Liquor aren’t the only products sold this way. Ford has them as does Chrysler and everyone has seen those Kool-Aid commercials that they only seem to play on B.E.T. and TV One (I swear I haven’t seen any other Kool-Aid commercials since the 80s). (See this: http://www.youtube.com/watch?v=nBeUGqeYsQg&playnext_from=PL&feature=PlayList&p=6B45DF619F0F5B52&playnext=1&index=8). And lets not forget about the Taco Bell chihuahua ? It seems that all the way back to the days of Uncle Ben and Aunt Jemima, corporations and advertisers have marketed products based on incredibly stereotypical images of minorities. The commercials that akaTito has posted are just as RoundupRussy said an extension of the same marketing schemes.

In thinking about this issue I didn’t want to single out McDonald’s or any other company, so I started to think about the difference between these commercials. For instance, I have been known to walk through the hall at my job singing “girl you got a ten piece, don’t be stingy” and when I saw that was RoundupRussy’s 3d video I chuckled at the thought that currently on my I-Pod I have an audio compliation of all of the St. Ide’s commercials from the 90s. I listen to them in my car and think of them as creative freestyles by these artists rather than as commercials for liquor or anything else for that matter.

The difference between the three commercials that AKA Tito posted and the three that RoundupRussy posted are the people in them. i.e. the McDonald’s commercials contains unrecognizable faces, actors we don’t know. Synthesized beats and convoluted situations. Whereas the commercials posted from the 80s and 90s contained recognizable (thereby trustworthy) faces. (Although the situations may not be as believable [I don’t think that women follow Fred Williamson down the street doing coreographed dancing). So I guess I am pulled into the guise of the advertiser really going out of their way to appeal to my sensibilities rather than just some synthesized version of what the marketing company thinks i will like.

That being said, the other thing is that in the 80s commercials the celebrities are celebreties in and of themselves, so the commercials do not have to neccessarily be targeted towards Black People whereas the McDonald’s commercials have an intentional audience, especially since I only see such commercials during Everybody Hates Chris or on TV One etc. So maybe when its someone I know selling me the product its more stomachable seeing as celebreties of every race do endorsements (You’ve seen that guy from Law and Order selling TD Ameritrade service). Which brings up another point, what white celebrities have you seen marketing alcoholic beverages or fatty foods recently?

I think that the issue here is no so much the commercials but their neccessity. In his comments akaTito alluded to the fact that the earlier commercials were selling malt liquor, and the McDonald’s commercials are selling fatty foods, both harmful substances widely available in inner cities. So the question should be do we need to advertise these things. Everybody eats at McDonald’s, you know where it is and what they serve. Does the commercial really change whether, how much, or how often ANYONE eats at McDnald’s including black people. And trust me, if McDonald’s only had commercials with white people or even cartoon images, although someone somewhere would say they don’t have any black people in their commercials, most black people are not going to stop eating there because of it. Especially when that might be the best restarant in the neighborhood. The same goes for the liquor commercials, although they don’t sell St. Ides anymore, Schlitz is still marketed as Blue Bull or something like that. It is still cheap and available, even though Lionel Ritchie isn’t singing about it anymore. So essentially these cheap, harmful products sell themselves. Is it neccessary for corporate America to market them to targeted populations that are inundated by these products in the first place. And is it neccessary for corporate america to go so far as to market them to targeted audiences whether they be black people or otherwise.

If Whole Foods, Trader Joes, or had a commercial that specifically targeted Black people, I definitely wouldn’t argue with that.

Okay, only because you asked Tito…

McCommercial 1 – Might make you want to double fist pound your neighbor, or someone who “looks at you the wrong way” – Your aggressive tendencies from eating too much processed beef with its hormones, antibiotics and ground gristle are kicking in… slow down and eat a real home cooked meal. It’s McCheaper than catching an assault case!

McCommercial 2 – Buy an apple and cut it up yourself. It’s McCheaper. You could probably add a banana and some grapes or a pear and call it lunch.

McCommercial 3 – If your African artifacts come to life because of your McFries, that’s not fry aroma, that’s Mcweed!