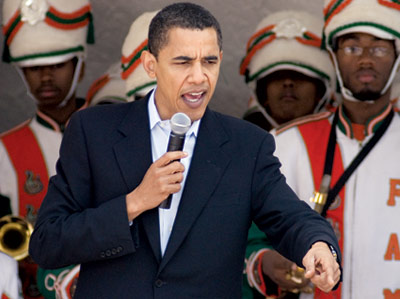 “They are the campuses where a people were educated, where a middle class was built, where a dream took hold,” Obama said of the nation’s HBCUs. “They’re places where generations of African-Americans have gained a sense of their heritage, their history and their place in the American story.”

Surrounded in the East Room by African-American college students and members of Congress, the president signed the executive order to “strengthen” the White House Initiative on Historically Black Colleges and Universities.

The initiative originated in President Carter’s administration, was expanded under President Reagan’s – and has been renewed by every president since, Obama said, “to help these schools give their students every chance to live up to their full potential.”

President Obama noted that there are some who question the relevance of HBCU’s, “who say that they’ve fulfilled their purpose; who say that after all the progress that we’ve made, their reason for being is now somehow obsolete.”

The president noted that some of the the nation’s most prominent African Americans benefited from these schools.

The president said he is proud to sign the executive order so young people can “put their hands on the arc of history and move this nation closer to the ideals of its founding, and the cradles of opportunity where each generation inherits the American dream and keeps it alive for the next.”

The president added he believed the presence of the Trojan Explosion drumline from Virginia State University in the audience during the event marked the first time there’s been a drumline in the White House.
-ABC News