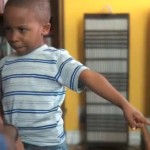 Funny…if you find this type of situation hilarious:

My assessment. Fellow comes to lady’s house with flowers. Sure her make-up appeared a little stripperish and not naturally enhancing, but that’s besides the point.

He comes in and she casually introduces her date to a 3rd person in the room. As she runs to the kitchen to grab something, we notice that she’s wearing a short skirt and walking rather provocatively. He does a bit of a gangsta lean as he checks out her backside, and he gives her the look that says, “I only value you as a sexual object.”

Then the camera cuts to him meeting that 3rd person that he was casually introduced to. His date’s SON. Oh yeah, let me not forget a brief scene cut into a bowl of Doritos. After checking out this 6 year old’s mother like a piece of steak, he attempts to make small talk with the fellow that he just casually met 20 seconds ago…and has now been left alone with.

The 6 year old was the smartest person in the commercial. He recognized that this guy pretty much just wants to have sex with his mother. He warns the dude, accompanied by a slap in the face, to keep his hands off of his Doritos…and his mother.

Cuz you know…the 6 year old is the man of the house and is protective over his mother.The mother that leaves him alone with a strange man upon a casual introduction