Plot: In the futuristic action-thriller ‘Repo Men,’ humans have extended and improved our lives through highly sophisticated and expensive mechanical organs created by a company called The Union. The dark side of these medical breakthroughs is that if you don’t pay your bill, The Union sends its highly skilled repo men to take back its property…with no concern for your comfort or survival. 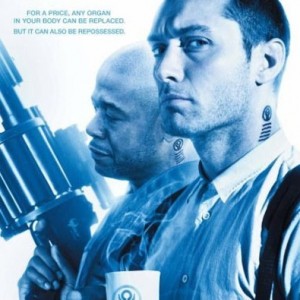 Jude Law plays Remy, one of the best organ repo men in the business. When he suffers a cardiac failure on the job, he awakens to find himself fitted with the company’s top-of-the-line heart-replacement…as well as a hefty debt. But a side effect of the procedure is that his heart’s no longer in the job. When he can’t make the payments, The Union sends Remy’s former partner Jake (Academy Award winner Forest Whitaker), to track him down.

Pros: The 3rd Act is exciting. The Gore. The soundtrack / Score is memorable.

Cons: The trailer sets low expectations which are moderately surpassed through most of the film. The Gore.

Overall: The problem with many films today is that they don’t educe an emotional connection or investment from the audience. We could care less about the character. Though its a cheap trick, the gore in Repo Men is executed in a way that requires emotional response. That along with the music is enough to carry Whitaker and Law through the first 2/3 of the film until it really gets good. My expectations were very low anyway due to the trailer and the thought of Forest in an action role. In the end its a sleeper that I recommend seeing. Matinee or DVD is fine.

Original Twitter Review: “Repo Men” is a sleeper. I had low expectations which were transformed during the show. Put 3-4 great elements in a bad and shake it. Nice. Awesome elements: Score, premise, action (3rd Act) more. I’d buy the sound track / score. Mef’s Release yo Delf update. RZA was in the flick. Sure he dropped a gem or 2.