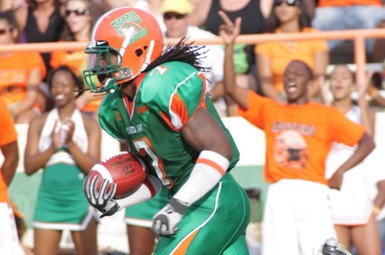 Leroy Vann’s 81-yard punt return for a touchdown was the highlight of the inaugural HBCU Bowl at the Cramton Bowl in Montgomery, Alabama Saturday.

The East squad, made up representatives from the MEAC and CIAA, defeated the West team from the SWAC and SIAC 26-21.

Florida A&M’s Vann earned Most Valuable Player honors for his performance. The NCAA’s record holder for career return touchdowns, he finished the day with four returns for 113 yards and one score.

More than 3,000 fans braved wintry conditions to watch the West take the early lead when Alcorn State’s Tim Buckley hit Achille Hendje of Morehouse for a 24-yard air strike. Buckley later threw a 29-yard pass to Alabama A&M’s Thomas Harris for another score in the fourth quarter to help close a 12-point deficit.

The East took the lead for the first time, 19-14, w hen Norfolk State quarterback Dennis Brown tossed a 33-yard pass to Lamarcus Coker of Hampton. Devan James of Morgan State rushed in to the end zone from four yards out early in the fourth quarter to increase the East’s lead to 26-14.