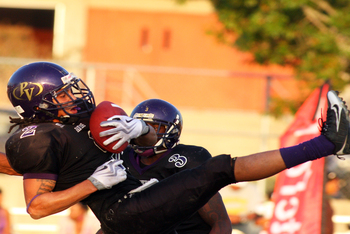 Prairie View A&M senior defensive back Anthony Beck added another honor to his resume’ on Wednesday as he was named to the 2009 Sports Network Football Championship Subdivision All-America Third Team.

A four-year starter at safety, Beck capped off an impressive career at Prairie View as he holds the school record for interceptions returned for touchdowns (3) in addition to picking off 11 passes and tallying over 160 tackles. The Houston native, who played at Channelview High School, also was named to the 2009 All-SWAC Football First Team for the second straight year, the Boxtorow.com/BASN All-American team along with earning preseason All-American honors by The Sports Network and Consensus Draft Service.

A construction science major, Beck also has aspirations of furthering his playing career as he recently participated in the inaugural Russell Athletic HBCU Bowl last weekend in Montgomery, Ala. During the week of practice leading up to the game, Beck had the opportunity to showcase his skills in front of scouts from the NFL, UFL, Arena Football, and Canadian Football Leagues.