Like most digital start-ups, EatingsForAbs.com started out of necessity and a desire for change. Coach Bryndan “Be” Moore, a certified nutrition coach, didn’t always live a life of clean eating and regular exercise.

Years ago, Be visited the gym intermittently, and would grow frustrated that he wasn’t achieving the physical results he was looking for. He lived a stop and start cycle with exercise and it was a passive approach to fitness. However, it was his father’s congestive heart failure and kidney failure that rattled him to his core.

After years of dialysis, as his father headed in for what would be a successful kidney transplant, Be had a moment of introspection that led him to pursue a significantly healthier lifestyle.

“There is a sense of helplessness that comes to the loved ones of those facing major surgery. In retrospect that was the day I decided to do the most I could to minimize my chances of passing on that experience to the people who care for me,” he said.

Finally more interested in living a healthier lifestyle, Be’s decision to hire a coach came after listening to rave reviews, and finally witnessing the physical transformation of a friend. With a combination of exercise, ridding himself of counterproductive habits, and improved nutrition, the scale finally began to move for Be. Inspired by his experience, he began learning the basics of cellular biology, human energy cycles and coaching. 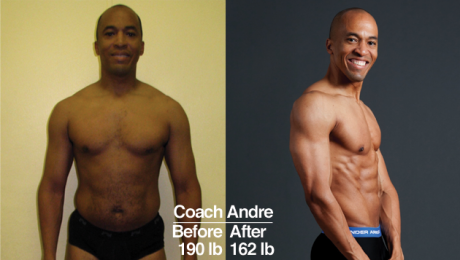 “It was truly a lesson in our interaction with our food from the molecular level through the organism level. That’s just the science!” he shared. “Then there is the study of the psychology of change and learning to deal with varying personality types as well as people with varying goals. It’s completely different coaching an athlete for sports-specific performance than it is to guide a person living a sedentary lifestyle, trying just to reduce excess fat.”

After several long months of studying, he passed his certification exam and entered the world of nutrition coaching—in person and online.

Starting with a small group of dedicated students, Coach Be’s focus on nutrition delivered significant results to individuals who were otherwise already fit. A personal trainer to the stars, a Legends Football League (formerly Lingerie Football League) athlete, and a meditation coach collectively agree that working with Coach Be helped optimize their results and got them the lean physique they were looking for. Word of mouth spread, and his clients grew to everyday people who were looking for a change: a bridesmaid, a new mom, ladies planning beach getaways, and men who were too busy to realize that pounds had quietly crept in.

One after another, Coach Be led his clients to success, and finally he partnered with former client Andre Fraser (Coach Dre) to create Eating for Abs: The Ultimate Body Fuel Course, a six month program delivered entirely online.

In true digital startup form, Eating for Abs’ popularity grew through social media buzz. As the course was developed and lessons were filmed, Coach Be posted on Facebook and Instagrammed dozens of photos under his @AlumniWellness handle. Food, workouts, and before and after photos of clients were all glimpses of what he and Coach Dre had up their sleeves. The photos enthralled followers and curiosity mounted as they promised to unlock the secrets of burning fat through proper nutrition. No pre-packaged food, crippling workouts, or calorie counting was required. Abs are made in the kitchen, they said, and they built Eating for Abs around eating delicious and healthy meals, as well as a few extra tips proven to drive results.

Finally, in late January 2013 the inaugural Eating for Abs online course launched at it’s maximum student capacity. Just a few months in, more success stories began to surface: one student’s physician discontinued his hypertension medication because he no longer needed it; another had her eyeglass prescription significantly reduced. And then there’s Instagram. One of the course’s most popular students is Angela Watkins (@OneFitMom) who regularly posts her meals, workouts, and progress with a number of hashtags, including #E4A to signify her commitment and support for Eating for Abs.

Coach Be still posts regularly, garnering more interest for the course with each day that passes. He and Coach Dre have mastered the art of the marketing tease. Visit www.eatingforabs.com and you’ll be greeted with student success stories, info about the course, testimonials, and just enough info to get you interested.

It took a life-changing moment for Be to change his life, and how he’s changing the lives of others in the business of wellness.

Quia Querisma is a digital marketing professional by day, and freelance writer by night. She embarked on her own quest for fitness in January 2013 through Eating for Abs, and has documented the experience on MyJetSetStyle.com.