It seems we haven’t progressed as much as some would have us think.

In the wake of the not guilty verdict handed down in the case of the NYPD slaying of Sean Bell, New York City is plagued by civil demonstrations. Life isn’t like the NBA, there are no make up calls, and nothing will bring the victim back. Apparently nothing has changed since Abner Louima, Amadou Diallo, Danny Reyes (NJ), or Rodney King (L.A.).

What will WE DO to save our friends, our children, and ourselves? Discussion begins now. 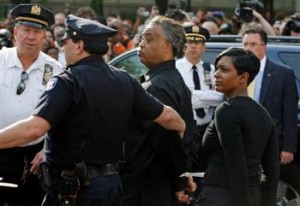 Reverend Al Sharpton, Nicole Bell-Paultre, Joseph Guzman, Trent Benefield and dozens of others were arrested (May 7) in the area surrounding New York Police Department Headquarters, One Police Plaza.
This was only one of the six locations throughout the city that Rev. Al Sharpton and the National Action Network designated as citywide “Slowdown” and “Pray In” locations.