Lorillard Inc., maker of Newport is especially popular with African-American smokers, about 80% of whom prefer menthol cigarettes, is engaged in a fierce battle to prevent the Food and Drug Administration from banning a product that accounts for roughly 90% of its sales..

Keeping those names out of the hands of critics is just one part of Lorillard’s multimedia campaign to thwart a possible ban. The fight’s next round is scheduled for next week, when a special FDA tobacco advisory committee is scheduled to meet to review data regarding menthol products. In March, the panel will recommend whether to extinguish menthol cigarettes altogether

In addition to arguing that menthols are no more addictive than regular cigarettes, the company is courting allies, including some African-American groups, to help make its case. Through its public-relations network, Lorillard has enlisted a consultant to get prominent blacks to espouse an anti-ban message in the media.

African-Americans have a slightly higher adult smoking rate than the national population. About 21.3% of black adults smoke, according to a 2010 Centers for Disease Control report, compared with 20.6% of all Americans. Blacks also have a disproportionately high rate of smoking-related disease.

Through the decades, minorities increasingly gravitated to menthol brands such as Newport, Kool and Salem as tobacco companies ratcheted up magazine and billboard ads depicting carefree black smokers. In surveys, blacks often express a taste preference for menthol cigarettes. 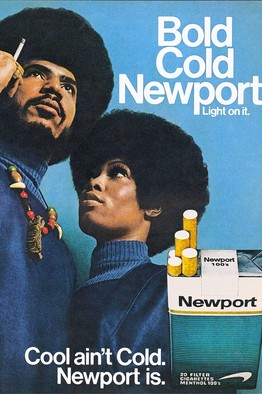 A Morgan Stanley survey of 878 smokers published in December found that 40% of Newport smokers would most likely try to quit upon a menthol ban. Twenty-six percent of the 191 Newport smokers polled were unsure what they would do and 15% said they would switch to non-menthol cigarettes.

Harry C. Alford, chief executive of the National Black Chamber of Commerce, penned an editorial circulated by Ms. Roy in which he argued against a menthol ban. Mr. Alford says Lorillard is a member of the NBCC’s public-policy council, paying $35,000 in annual dues to work with the chamber on issues of common interest. He says the editorial effort “was not in any way influenced” by the chamber’s partnership with Lorillard.

“African-Americans like their Newport cigarettes, and there is no reason why they should not be allowed to have them,” says Mr. Alford.

Such talk has angered some health advocates, especially in the black community. Dr. Louis Sullivan, who served as U.S. health secretary in the first Bush administration, says he is “very disappointed and very distressed” that some African-American groups are allowing “themselves to be used by tobacco companies.”