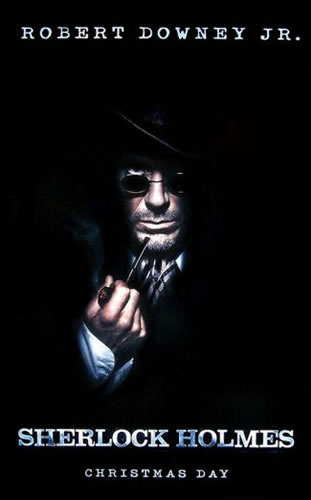 Sherlock Holmes, starring Robert Downey jr in the title role and Jude Law as Dr. Watson, was fun, explosive, and smart action-mystery film. We’re seeing a newly redefined Holmes/Watson pairing that updates both characters and adds a much needed further depth to the Watson role, and a playfully obsessive nature to the worlds most famous detective.

Pros: GREAT fight scenes. The chemistry in dialog between Downey and Law played well on screen. Several beautifully shot scenes and an explosion scene (you’ll know it when you see it) was well done, perhaps the best I’ve seen. Potential for a sequel. Fun and smart story.

Cons: Guy Ritchie’s brilliance shines brightest on films he’s written and directed as opposed to simply directing as in the case of this film. With the expectation of seeing a “Ritchie Film” ala Snatch, Lock stock, or Rock n’ Rolla, seeing Holmes could be a let down. It’s like seeing the Mona Lisa smiling in a Coca-cola commercial. The art of character development we’re accustomed to seeing attached to Ritchie’s name is missing.

Overall: This movie was a lot of good fun. It was reminiscent of the first Pirates of the Caribbean film, and was a wonderful surprise in the theater. Hopefully this franchise (if sequels are planned) will not disappoint as in the Pirates franchise. Check it out in the matinee or turn up the stereo at home when the dvd comes out. You’ll be talking about it for days after.

Glad you liked it. I loved it. It renewed my crush on Ritchie, Downey Jr and especially Law. RockNRolla was the worst Guy Ritchie movie ever. But he made up for it with Sherlock.

I’m not sure that anyone is happier than me that RDJ is sober and is acting again! I really enjoyed the movie, and thought it was fun. I had forgotten Guy Ritchie directed it until the credits rolled.

I thought the first hour of the movie was excellent.. the second half seemed to blatantly set up the sequel. The fight scenes as you mentioned were great.. i loved the slow motion explaination of his disabling tactics. A true unconventional superhero movie. A Must see (DVD or Bluray though)