Jessica B. Harris’s absorbing new book, “High on the Hog: A Culinary Journey from Africa to America

” zeroes in on what she sees as the two divergent strands of African-American cooking. The first reveres homey staples like corn pone, fried chicken and chitterlings (a pig’s small intestines), and embraces those cooks who can, as she writes, “put a hurtin’ on a mess of greens.”

The second strand is aspirational and omnivorous. Historically, it includes recipes from, she says, “Big House cooks who prepared lavish banquets, caterers who created a culinary cooperative in Philadelphia in the 19th century, a legion of black hoteliers and culinary moguls and a growing black middle and upper class.”

Ms. Harris belongs, firmly, to that black upper class. She’s a respected cookbook writer — her many books include “The Africa Cookbook” (1998) — who divides her time, according to the book’s dust jacket, among New York City, Martha’s Vineyard and New Orleans. 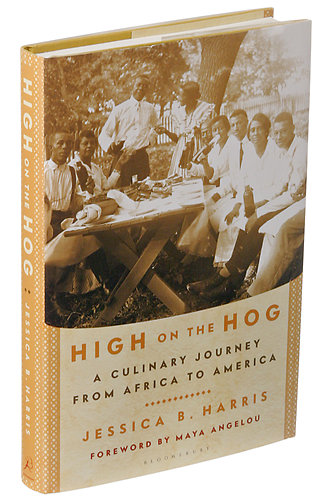 In “High on the Hog” she branches out into narrative nonfiction, with mostly toothsome results. Her plain, gently simmering prose will not make you forget Michael Pollan’s. But Ms. Harris has an eye for detail and an inquisitive manner on the page, qualities that take any writer a long way.

“High on the Hog” covers a lot of territory in terms of African-American eating habits. (Ms. Harris refers to those eating habits, widely construed, as “foodways,” and I wish she wouldn’t. It’s a sanctimonious term that’s caught on among food historians, especially Southern ones, in recent years. I await the books on sexways and toiletways.)

Ms. Harris examines West African staple foods in the centuries before slavery; she details the grim slop captives were fed during the terrors of the Middle Passage. She explores the life of George Washington’s revered black cook at Mount Vernon, Hercules, and Thomas Jefferson’s talented cook, James Hemings, the brother of Jefferson’s mistress, Sally Hemings. She dilates on black cowboys and Pullman porters and the authors of the earliest black cookbooks. Her true topic is, as she puts it, “the Africanizing of the Southern palate,” and ultimately of the American one.

I especially enjoyed the chapters that cover the second half of the 20th century and beyond. She quotes Ralph Ellison, in “Invisible Man,” describing a food cart “from which a stove pipe reeled off a thin spiral of smoke that drifted the odor of baking yams slowly to me, bringing a stab of swift nostalgia.” Ms. Harris loves this sentence. Yet she gently reproves Ellison, letting us know that he was almost certainly describing not yams, but sweet potatoes.

She lists the restaurants where important players in the civil rights movement liked to eat big. She detours into the dietary strictures of Elijah Muhammad, the leader of the Nation of Islam, who urged his followers to get off the “slave diet.”

Muhammad wrote: “Just stop eating the swine flesh, and your life will be expanded. Stay off that grandmother’s old-fashioned corn bread and black-eyed peas, and those quick 15-minute biscuits made with baking powder.” So what did Muhammad eat? A lot of bean pies, Ms. Harris writes.

She is outraged at the “culinary apartheid” she found in some urban neighborhoods in America. “We were getting stuck with overprocessed foods, low-quality meats and second- or third-rate produce,” she writes. “It is a lesson I will not forget.”

She casts an appraising eye at the recent crop of black culinary trailblazers. She mourns the early death, in 1998 at 42, of Patrick Clark, a black chef who made his name at Manhattan restaurants like Odeon, Cafe Luxembourg and Tavern on the Green. She explores the careers of Edna Lewis, Sylvia Woods — the owner of Sylvia’s, the popular Harlem restaurant — and the New Orleans Creole cook Leah Chase.

Ms. Harris flips on the TV and discusses, excellently, Pat and Gina Neely, the lively hosts of the Food Network show “Down Home with the Neelys.” This couple, she writes, “have become arguably the best-known African-American cooks in the country,” and thus worthy taking seriously.

Ms. Harris seems to approve of the Neelys, sort of, though there were bumps along the way. “At the show’s inception, most viewers were outraged by everything from the dishes prepared on the air to the dialogue,” she writes. “A strawberry cake prepared with cake mix, Jell-O, strawberries and whipped cream came under particular fire, as did the family’s ‘loud and boisterous’ manner.”

She goes on about the Neelys: “The level of sexual innuendo in the couple’s banter and the personal style of Gina Neely were other points of dismay. African-American viewers were particularly concerned that the show not be a throwback to behavior considered stereotypical and not a representation of the diversity and sophistication of African-American lifestyle and cooking.” She concludes, “Changes were made.”

Black cuisine is still too often viewed as “unhealthy, inelegant and hopelessly out of sync with the culinary canons that define healthy eating today,” Ms. Harris writes. She notes that most black families restrict those artery-clogging meals to Sundays, holidays and family reunions. And she declares, wistfully and yet with optimism, “The cooking of Africa has yet to have its moment on the foodie radar.”