On a stormy Thursday night, I got a txt msg. It went down like this.

@BAnjeeB: hey Billy want to take a Ropes and Silks class?
@BillyOceanbot: Hell yeah! (thinks to herself, what the hell is a ropes and silks class).

And so the adventure begins with the fun and fitness duo. Ropes and Silks is an aerial class made popular by the performances of artist Pink and by TSNY, a New York based school offering classes aerial and trapeze classes. TSNY recently opened up a location in DC down by the Nationals Stadium.

The Ropes and Silks class specifically focuses on:
“Using strength, grace and flexibility, you climb the apparatus and move your body into amazing and beautiful poses and shapes. Drops and slides are an exciting and fun part of learning these circus apparatuses.”

Upper body strength I do not have at all. I tremble at a push up. Why in the blue blazes I decided to follow along with @BAnjeeB I have no clue, other than my desire for adventure and to hang out with my buddy. I had also psyched myself into believing there would be a small crew of people who would lift me up on to the ropes or some kind of harness or helium contraption that would allow me to levitate. Because there is no way I alone was going to be moving this body into “amazing and beautiful poses and shapes” while suspended in air.

We arrived at the class and there was no contraption, no helium, no harness or small army to lift me into the air. There was simply two silks hanging from a very tall ceiling and standing next to it a small, compact and powerful woman, Robin of Artisan Athletics. For an hour I cursed, desired, loved, hated and praised Robin. She showed us how to “simply” climb up a silk rope by using our lower body to push and upper body to pull. We used every muscle in our bodies and we sweated and cried and I had a little temper tantrum of feet stomping in the corner. But it was fun! So much fun we followed Robin to her Aerials class at Urban Evolution in Alexandria, Va. We learned new moves on the silks, including splits. It was a hoot! I learned my body can do a lot more than what I think it can do! And that is exciting. That means I still have the capacity to change, simply by trying.

Fitness does not have to be all machines and free weights. It does not have to be in a gym or on the hard concrete. Find what you love to do. Take a hoola-hoop class, hopscotch, two-step, pole dance, kick boxing, dodge ball, or do suspension training (ie TRX). But do something and have fun doing it.

Next Fitness Adventure episode… on a stormy Saturday night, @BillyOceanbot gets a txt msg:

@BAnjeeB: hey Billy want to go to a Bikram yoga class?
@BillyOceanbot: Hell yeah! (thinks to herself, what the sam hell is Bikram yoga?) 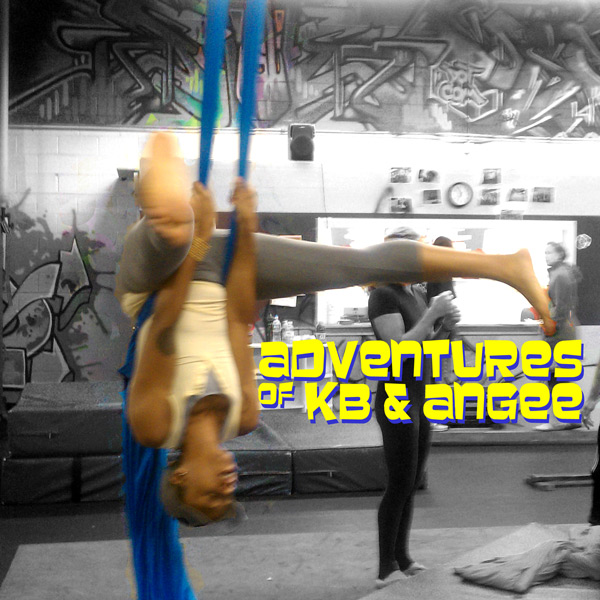 0 responses to “The Adventures of @BillyOceanbot and @BAnjeeB: Ropes and Silks”