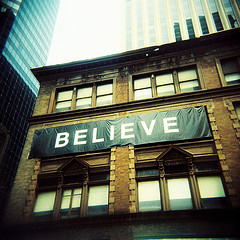 Lyrics from “Believe” by Raheem Devaughn

With affection like a dreamer
with patience and understanding
like a teacher with a student, vice versa
promise not to hurt you, not to leave
not to lie, not to cheat, not to fuss
not to stress, like the rest in your past

Believe me I ain’t like most men
I ain’t like them others
you then dealt with in the past
just have some faith
that is all I ask, believe in me

“Believe”, is one of those “throw ya panties on the stage” type of slow jams. I mean it makes you wanna believe. It makes you wanna hold on to the fairytale that this time it will be different. Who hasn’t heard that before? What makes us lack faith? To not believe? I am a strong believer in not asking other folx to carry our bags. Remember Erykah Badu told us that we were gonna “miss our bus” cuz we had too much stuff. I’m also a firm believer in trusting each person on his merits. What makes us judge someone on the actions (merits) of others? What makes us ask the new guy to carry the other guy(s) bags.

This was my basic “marriage material” list (when I met my husband I was 29 years old):

A man with NO kids

A man with a good job (career)

A man that had his own home.

A sensual, open-minded lover, but one that would always love ME first.

If someone would have said to me. I got this good guy, and ran down my future husband’s story. I would have said NO in a heart beat. But when my husband and I re-connected (BTW, via the internet), I figured I was just linking up with an OLD friend. So when he told me he had TWIN girls that he had custody of, that didn’t strike a cord. I gave him credit for being a good father. When he told me that he was living with his mother as she was helping him raise his girls (that didn’t strike a cord). The fact that he lived in Baltimore (while I lived in North Carolina) didn’t matter, because I wasn’t about to date him. When he asked me if he could come visit me, I said I’d meet him ½ way. He told me that weekend that he would marry me. I sucked my teeth and said, “Yeah, right! You don’t think just because I’m about to turn 30 I’m getting desperate, do you?” 6 months later in May, we were engaged.

Previously, I had prayed to God to fix the men I was dating and make them right so that what I believed needed to happen would happen. Then one day, I changed my prayer and I prayed that God would work on ME to prepare me for the man who would be my husband. So when my job announced that there would be voluntary lay-offs in June, I volunteered (with no job and a house note, so that I could be where I BELIEVED I was meant to be). My family thought I was crazy. My friends thought I was drugged. My sister cried, real…..sad….tears. When my aunts told me not to get involved with a man with kids, I smiled. I believed…..and 5 years later, I still believe.

0 replies on “Finding it hard to BELIEVE?”

I believe stories such as yours need to be told… and often… It relays the realistic, accessible ways in which we find one another and the sacrifices that we make to unite..

beautiful story…. fairy tales may not be as sterile and simplistic as the ones we remember… but love no matter how it is found is magical none the less…

Fox, this came right on time for me… Walking home last night, I was wondering what a fool I was to believe again. Seeing people’s love fall apart and remembering my own last failed adventure into that mysterious forest, I wondered how foolish I am to now be so pluck-silly about someone who isn’t my usual “type.” I don’t know where I get the gall to be so bold. But it is good to live a daring life in which dreams can come true.

Sniff, Sniff!!!! What a lovely fairytale story (that i’ve heard a zillion times and it never gets old)!!!! I am a fairytale kinda person too! Because i’ve been married already and divorced (Happily, btw), my search is different. I am chasing a feeling, not a person. I got married without the “fairytale” feeling the first time. I wanna live in a fairytale and do believe that it is real. I don’t put my past relationship woo’s on my current dude. It’s not fair!!
I do agree that people should put away their “type” list and live and love honestly with their hearts. It makes it sooo much simpler. Have you ever had a old person tell you that “you’re gonna let your brain talk your heart out of the person for you?” I BELIEVE that!!!
In that I agree that we should cut the “list” and go with what makes your heart smile.

Oh, had I listened to AFox’s looooong email about why I should get married to my, now ex husband, I wouldn’t be in this mess im in 🙁 I listen now!!!!! It would have been the best advice I’d ever gotten, Had I Listened!! LOL

Corection: That last sentence was supposed to read, “Oh, had I listened to AFox’s looooong email about why I shouldn’t get married to my, now ex husband, I wouldn’t be in this mess im in”

A Fox…another great discussion. We live in such a “hands on” world, that it is so hard to believe in what we can not see and touch…but that’s what faith is all about. Love ain’t easy, that’s for sure!! I have used lists before – which never work, and now try to focus on character traits of the person. And there are those fairy tale stories – I think when it’s right, it’s right – and to others, that is the best story that can every be told! Keep inspiring!!!

hi, my list is basically the same as yours, but there is more to mine… However, I am not willing to compromise… What do I have to do to find a man that has it together?

To Shaunte’ (if you are willing to state your age…I’d like to know b/c I can frame my response better….but if not, then the following response can surfice. It’s not a compromise so much as it’s a realistic expectations list based on where you are in life. If you are like 40 years old and say I want a man that has never been married and doesn’t have kids, then that’s not realistic. However if you say I want a man to love me for me, be true to me, be a good family man, then that’s not worth giving up. I’m not advocating giving up your BASIC needs….but if meeting a “balla” is on your BASIC needs list…then I dare argue that theree should be some level of compromise. When I was 22…I was not willing to give up anything on the list…but as the moral of my story goes…it’s not MY way or the highway…it’s HIS way or not at all.

The other thing my husband wants to add is that if you want a man that’s a hustler (and I’m not saying a street corner pharmaceutical salesman) then that means that he’s not gonna have every waking minute to spend with you, he’s gotta be on his grind. He’s gotta get that money and make it happen (legally of course). But if you want a guy that’s there for you all the time, marry a teacher who’s satisfied with being a teacher. Not that there’s anything wrong with being a teacher at all…but the teacher who just loves being a teacher will be available to you from 4:30 PM on and every day in the summer. So there is always a compromise just be prepared to make the right one(s).

HappyFat…I got ya back girl. I ain’t always there when you call…but I’m always on time!

You know I always got ya back shawty…we don’t talk as much as we usta…but you know how us Stallionaires do..we always love each other whether near or far……like you mah “play” cuzzin. :o)

Alison, thanks for sharin a little of your life wit us. I’m a firm believer in two people being “equally yoked” in a relationship. Now, there are different strokes for different folks, so this could be a mental yoke, an emotional yoke, or a spiritual yoke. Whatever void you have, is what needs to be filled by that other person in the relationship. If that person doesn’t fill any of your voids, then chances are, you’re not equally yoked. And the key to knowing if you’re equally yoked with someone is by first knowing yourself well enough to be honest with your partner. I like to call it “goin into a relationship head first, instead of ass first”. So, for all you people out there who think physical passion could make or break a relationship…that could just be a booty call you dealin wit. To “believe” in your relationship takes more…and includes words like US and WE instead of I and ME. Alison, for your list, I noticed that what you ended up wit mostly, was completely opposite of what you set out to find. So, this could mean that for others out there making list…whatever you put down…you’ll end up wit the opposite of what you put. *sarcastic smirk*

Well spoken A.Fox! GOD provides what we need which isn’t always what we want. But, we have to be willing to follow HIS lead. I applaud you for following your Spirit inspite of lack of encouragement from others. Everyone’s path to happiness is different. Sometimes we have to move beyond our boundaries and comfort zone to receive that which we seek.

I was waiting on you (smile). I don’t think I ended up with the opposite per se. I think that what I needed vs what I wanted was sorted out. I got what I needed. Also…as I tell my sister. the JR A Fox, sometimes what you want will get on your nerves worse that you think.
Your WISH LIST: I want a man who is financially stable and fiscally responsible.
RESULT: You get a man that’s making you budget your check book to the penny and giving you the evil eye if you treat your self to a CD and a latte, though you own your own home, car have never been late on a bill and have a sizeable 401K and other retirement vehicles. So he’s fiscally responsible, but to the point of aggravation. :o) Now I’m not saying that he should be fiscally IRRESPONSIBLE either. But anyway…..US and WE are key points….not just to speak them, but respect them.

Mz Phyl….you know the trials and tribs I was goin’ thru in ILM…..so….I made it out alive, in love and in once PEACE. :o)

Mrs. Fox, I feel that…good point…cuz I ended up wit what I needed also…but still don’t know what I wanted…and not sure if I can handle what I got. So i guess in the words of a BRU profile…its complicated. I’m a strong “believer” though, so we’ll see what happens.